The Revelation Will Not Be Trivialized

Despite a fondness for technology, science fiction more often distrusts change than embraces it. Science and tech regularly threaten to destroy, assimilate, alienate, or consume humans. This goes double for Christian sci-fi, a small but growing market dominated until now by Stephen Lawhead. But a new force has loped onto the scene in the form of debut novelist Evan Angler.

Logan Langly looks forward to his thirteenth birthday, when he will receive his Mark and become an adult. American Union citizens need the Mark to buy, sell, work, or vote. But Erin Arbitor, new girl in school and daughter of a government spy, learns that a party of Markless refuseniks has Logan atop their hit list. Suddenly Logan finds himself immersed in a plot involving domestic terrorists, high finance, and the fate of the Global Union.

Savvy readers will recognize the premise from the Bible, specifically Revelation 13:16-18. Yet I would not call this an exclusively Christian novel. Drawing on influences as diverse as Blade Runner, CS Lewis, Judge Dredd, and classic Doctor Who, Angler assembles a taut all-ages science fiction thriller that simply takes a Christian premise seriously. It makes easy reading, but will stick with you long after you put the book down.

Notwithstanding the comic book names (Logan Langly, Erin Arbitor, Hailey Phoenix, Peck and the Markless Threat), Angler’s characters have psychological complexity that propels the story, separate from the plot. Where many spiritual novelists hold characters hostage to the plot, Angler’s characters drive his story. They combine normal teen ambitions, like popularity and hormone-driven romance, with political needs that cut them no slack. 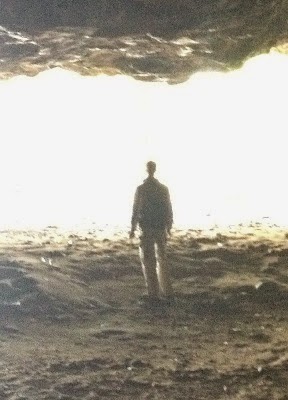 Angler creates a society of stifling conformity and massive technological alienation. In a world of massive ecological devastation and the ravages of war, a benign but autocratic government has cornered its people into choosing whether to survive or know freedom—and, as so often happens, citizens have voted with their Gut rather than their Head. Now America is divided into a two-tiered society, yet people don’t even notice what they have given up.

Some of Angler’s themes will not surprise anyone who reads Christian fiction. He distrusts earthly authorities, especially centralized government, which entangles citizens in others’ vision. Governments may grant stability, but what the state gives, the state takes away. And he sees the loss of tradition as a diminution of human potential. Logan Langly rebels against a culture that exists entirely to feed short-term wants.

Nonetheless, Angler embraces themes that would make many Christian writers queasy. He accepts that man-made environmental catastrophe may hasten an apocalypse more than demonic influence. He does not turn to the supernatural to demolish the world, as LaHaye and Jenkins do; he seems more inclined to think that, with our sinful nature, humankind doesn’t need supernatural assistance to subvert God’s creation.

He also doesn’t reflexively trust authority. While authors like CS Lewis or Barkley Briggs may demonstrate that a king or state has feet of clay, Christian rebellion seldom casts doubt on civilization’s entire foundation. Some authority persists, whether a Church or a charismatic leader or a father. But for Angler, the Church is subsumed, the state is autocratic, and adults are universally dim. Everything Christian readers expect abandons them.

Christian fiction is overwhelmingly conservative. Observe how the shelves of Bible bookstores teem with Amish romances and World War II thrillers; it appears Christian novelists live in the past. Not Evan Angler. He would rather tell a story of real psychological impact, even if it leaves comfort behind, than soothe readers with more of what they’ve seen a million times before.

My views on apocalyptic literature are well documented. Too many writers want to end the world, but don’t know what it means when a world ends. The ground below our feet may survive, but a world ends when everything we take for granted turns to dust. And that’s what happens to Logan Langly: in bringing down the Markless and supporting the Union, he thinks he’s on the side of the angels. Only later does he learn how wrong he was.

For lack of a better analogy, I would call this The Hunger Games for the Christian set, or perhaps the Revelation for a dystopian malaise. Like the best science fiction thrillers, it keeps readers guessing through its kaleidoscope of shifting loyalties and bleak reversals. Though written for teens, adults will find plenty to like about it. And though it doesn’t sermonize, it leaves you with heavy ideas to ponder long after you close the covers.
Posted by Kevin L Nenstiel at 5:30 AM